Since the terrorist attacks of September 11th 2001, the Islamic faith has had a negative connotation attached to it in the United States. Many people do not have any understanding of the religion beyond what the talking heads espouse from their television sets. To them Islam is a monolithic religion, while they may have heard terms like Shi’a and Sunni, they often fail to recognize them as different denominations. This blog post is part of a series that wishes to change all that. Each post will focus on one aspect of this multi-faceted religion giving a brief overview of its history, key figures, and other factors that make it unique.
The images of a whirling dervish or flowing Islamic poetry are what immediately comes to western minds when Sufism is mentioned. However, the mystic traditions associated with the Sufi have created many tariqahs, or devotional paths, that spring from individual teachers. One of the oldest and most widespread of these paths is that of the Qadiriyya.

The founder of the Qadiriyya, ‘Abd al-Qadir al-Jilani (1077/8-1166 CE), had no intention of founding a tariqah. A man of Persian decent he immigrated to Baghdad at the age of eighteen where various religious scholars instructed him. His primary instruction was in Hanbalite religious law his instructor was,   Abu Sa’id b.  ‘ali al-Muharrami (d. 1119); al-Qadir’s ascension as a religious leader was cemented in 1133 when he was named a Shaykh of the madrasa that al-Muharrami had founded, a position he held until his death in 1166.[i]  Although al-Qadir is considered the founder of the Qadiriyya tariqah, the movement truly did not develop until after his death.  Al-Qadir’s son, ‘Abd al-Razzaq (d. 1206/7), carefully constructed his father’s legacy in the way he compiled and released his writings. Some claim al-Razzaq authored certain poems to legitimize his claims about his father.[ii] “saying that his father was descended on his father’s side from Hasan, the older son of the Prophet’s daughter Fatima (605-633 CE), and on his mother’s side from her younger son Husayn (626-680 CE). For each of these assertions he provides a corresponding genealogy.”[iii] Abd al-Razzaq then goes on to say that, his father was also related, through one of his paternal or maternal grandparents, to all four of the venerated Rightly Guided Caliphs.  According to ‘Abd al-Razzaq, the first holder of the post of [pole] was none other than the Prophet Muhammad (570-630 CE) himself. This rank passed after the Prophet’s death to his cousin, the fourth caliph ‘Ali (600-661 CE), and was inherited from him in succession by poles who each invested his trusted disciple with it. ‘Abd al-Qadir was invested with the rank of [pole] by Abu Sa’id b. ‘Ali al-Makhzumi, who held it before him in this continuous chain of succession. “[iv] This gave the Qadiriyya a religious legitimacy against their Abbasid rivals in Baghdad caliphate.
When the Mongols sacked Baghdad in 1258 al-Qadir’s madrasa was left untouched. Perhaps the sparing of this site inspired the 13th Century writings of Nur al-Din ‘Ali al-Shattanufi (1246/7-1314 CE) a  teacher at al-Azhar university-mosque in Cairo. He “consolidated the legend of ‘Abd al-Qadir as the holder of the highest authority among the awliya’ and the Prophet’s deputy in the religious guidance of the Muslim community in the immediate aftermath of the collapse of the caliphate.  .  .  His legend thus alleviated the great religious uncertainties this cataclysmic event caused to Muslims, and accorded with the nostalgic sentiments Baghdad evoked in the Muslims after the collapse of the caliphate.”[v]  When the Ottoman Turks conquered the area centuries later in 1534 sultan Sulayman (1494-1566 CE) had a dome placed on al-Qadir’s tomb thereby, “he signaled the recognition . . . of the Qadiriyya tariqah as his main Sunnite allies in Iraq in the confrontation with the Safawid Shi’ites.”[vi]
The legitimacy the Qadiriyya thus firmly established it began to migrate throughout the Muslim world. It proliferated across Northern Africa, Afghanistan, and China. Part of this tariqahs appeal is that al-Qadir never established a set way for religious ceremonies to be conducted. This allowed local religious leaders to adopt current practice into the venerated lineage of Qadiriyya. From here, we will look at the influx and influence of the tariqah in the areas previously mentioned.

Qadiriyya  made its way into Northern African primarily along the trade routes that crisscrossed the continent from an Egyptian home base.  In West Africa, the tariqah found a powerful patron in the person of Mukhtar al-Kunti (1728-1811 CE). His adoption of the belief system, and his families influence combined to provide a climate that allowed Qadiriyya to flourish in the early 18th Century. The Kunti line continued to spread the faith even after Mukhtar’s death. His son Ahmad al-Bakka’I al-Kunta (1803-1865 CE), and his followers, were “active in many parts of West Africa and [were] tied to the forces of revival. There were Qadiriyya centers [throughout West Africa] with at least some ties to the Kunti leaders in Futa Jallom, Futa Toro”[vii]
When French forces pushed into Algeria in the 19th Century they found not only a culture more advanced than they had expected but also a foe that would bedevil them for decades to come, namely Abd al-Qadir (1807-1817 CE). Al-Qadir was both a religious and a political leader who would attempt to combine the Berbers and the Turks into a single polity to resist French encroachment, “al-Qadir soon established a militant movement that was both an army and a state.”[viii] Although he managed successfully to fight the French for twenty years, he eventually succumbed to their technical superiority as well as internal conflicts with other Muslim leaders: such as Mustafa b. Isma’il (1769-1843 CE) who clashed politically and militarily with al-Qadir throughout the 1830s.

The Qadiriyya in China created not only a religious community but also a sub sect of Chinese who consider themselves ethnically Muslim yet do not practice the Islamic faith, the Hui. The tariqah entered into China in the late 17th Century.   When the travels of Khoja Abd Alla (1616-1690 CE) took him to the orient, “a twenty-ninth-generation descendent of Muhammad . . . records show he entered China in 1674 and preached in Guangdong, Guangxi, Yunnan, Guizhou, and Linxia, Gansu, and was finally buried in Guizhou in 1689.”[ix] A worship center has since sprung up around Abd Alla’s tomb, and continues to this day.

The combination of religious legitimacy and flexibility has enabled the Qadiriyya Tariqah to span across several continents and provide a sense of identity for people of a variety of backgrounds. Beyond the spiritual applications, this movement has provided a unifying force in times of political upheaval.  Its ability to change with the times should see it to continue to grow and expand in the years to come. 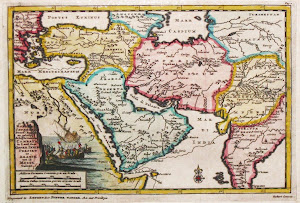